This 29.8 km leg begins in San Gimignano and takes about 7 hours to complete. It is one of the most beautiful legs of the Via Francigena, and after the first section of the path, you begin to walk up and down in the valley of the Foci river, near Molino d’Aiano.

Water supplies and places to eat are only available in towns. 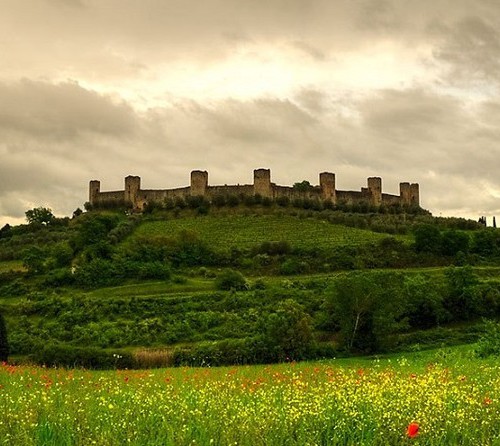 San Gimignano – The area of Aiano-Torraccia Chiusi has been known since the beginning of the twentieth century. There is a Roman building that has recently come to light: it is a Roman villa of the wealthy aristocracy that was in use between the fourth and sixth centuries AD, and until the second half of the seventh century. AD The importance of the structure is proof of a strong and prestigious presence of Romans from late antiquity. It is also important for its position along the Foci river, an area long ago identified as the possible area identified by Sigeric in his journey from Rome to Canterbury (Sce Martin Fosse). Get there with the road from San Gimignano to Poggibonsi, just before the intersection with Colle Val d’Elsa, in the direction of Monti-Torraccia Chiusi; follow the dirt road and continue to walk to the archaeological area (about 2000 m.).

Poggibonsi – Its origins are ancient, and ruins have been found that can be traced back to late Roman times, as well as Lombard and Carolingian times. In early Middle Ages, the presence of Abbey of San Michele Arcangelo in Poggio Marturi led to the growth of the village of Marturi. In Poggibonsi, it is worth visiting the Archaeological Park and the Fortress of Poggio Imperiale, created and designed by Giuliano da Sangallo on a commission of Lorenzo de’ Medici.

Colle Val d’Elsa – Dometaia Archeological Park – Etruscan traces along the Via Francigena
The necropolis of Dometaia has been the object of research and study since the late 19th century, when the Marquis Bonaventura Chigi Zondadari began digging in the area and found an important sepulchre from northern, inland Etruria and was used from the mid-6th century BC to the 1st century AD. After the creation of the park, some 40 tombs of varying nature were dug up: hypogeum tombs made of more orthogonal rooms with respect to the vestibule and a range of simple tombs, including different kinds of “trench graves” for normal people. The most important hypogeum family tombs of the area were important and considered prosperous because they were placed on fertile soil and in a prime position along major roads, this necropolis is located along an important ancient road, which likely coincided with the Via Francigena. The “Ranuccio Bianchi Bandinelli” Archeological Museum, located in the medieval Palazzo Pretorio, in the historic centre of Colle di Val d’Elsa, gathers material of Etruscan and Roman origin from the Valdelsa area, which was very populated in ancient times. The vase that we show here was decorated with the technique of the red figures and is a product of the workshop of Pittore di Milano, who worked in Volterra in the late 4th century BC. He was often commissioned to work during symposia; a fact that can be confirmed by the Dionysus-like motifs on the vase, which show an entourage of Satyrs and maenads. The object, which was found in the room of a tomb in the Dometaia necropolis, is one of the most noteworthy pieces in the ancient burial ground due to its excellent condition and the richness of its decorations. Together with other elements of the tomb and the materials used in the tombs, it is important to note how the Valdese area, and more specifically this zone of the area, was scattered with important transit roads, already in the Etruscan age. The roads were then re-paved and re-used in subsequent eras, and today they represent the “Sigeric” section of the Via Francigena.